Just TAP this evening, so we knew we'd find something awesome. Enjoyable prebeers in the sun at the Anchor then straight over to IDM. Been a while since we'd been in here so it was a nice change. Don't get me wrong, Cussey has been great, but you can have too much of a good thing!

So the quick summary of IDM is that it’s over 750m long, 83m deep, and we've lost the way on, or more specifically where the draught comes from. We know cos of physics that it comes from a higher entrance, and from the west. However the furthest western reaches we’ve found so far, which are all quite deep, all close up with no draught. On the last few trips we found a few things in the roof above TAP Traverse, which is the area where the draught is seen last, so it made sense to climb them.

We had a bit of trouble opening the lid which needs a bit of TLC then enjoyed the clean and easy route to the Tap Room. TAP Traverse is a bit of a faff, swinging through the ledgeless rift on the rope, but not too bad in this direction at least. The plan was to bolt climb the aven above the pitch down at the end of traverse, as this is the furthest point west at this height. As hoped the rift just before the wide aven was narrow enough to quite easily freeclimb/bridge/squeeze up and I was able to ascend the full 15m without needing to place a bolt. 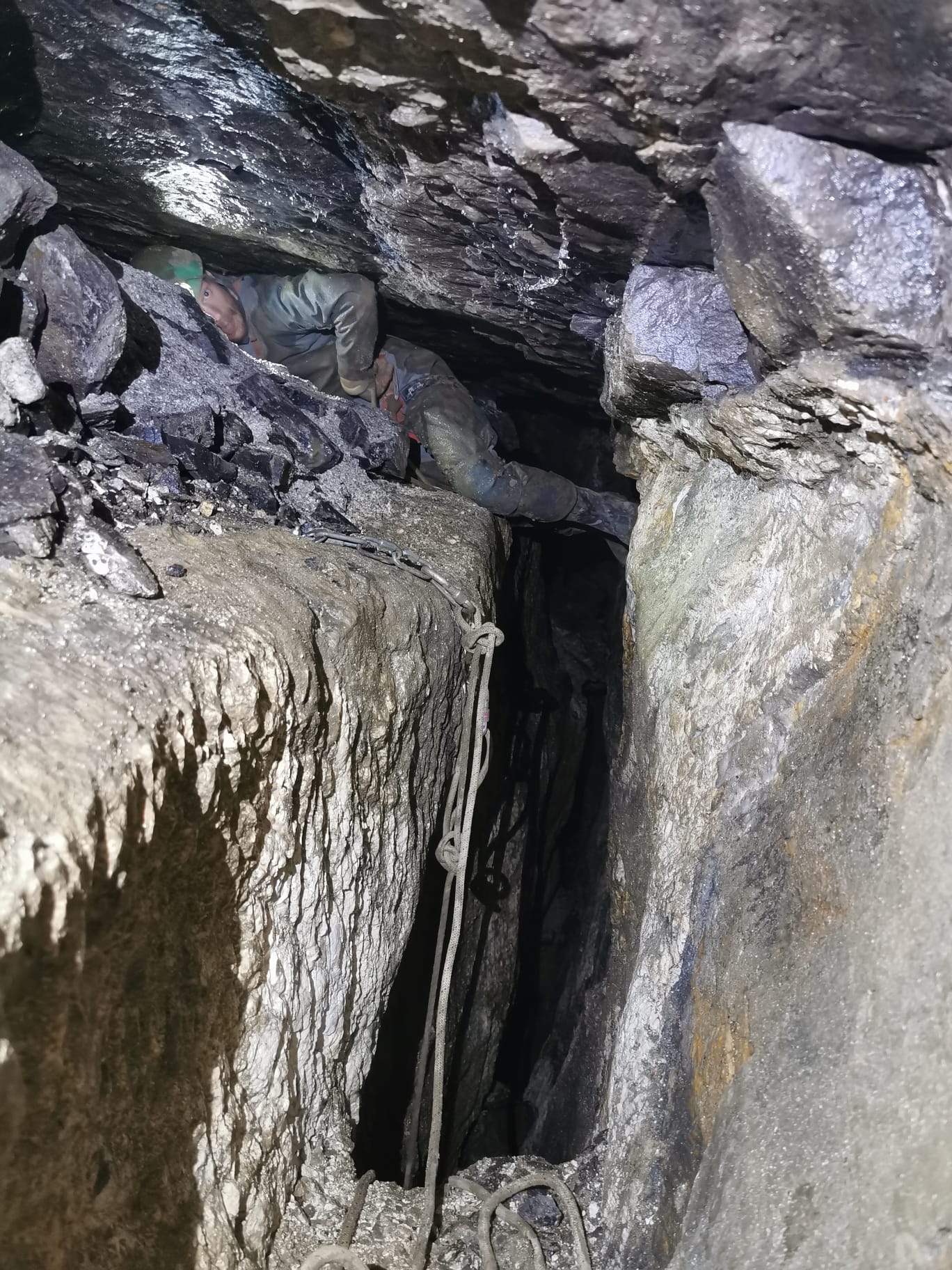 Jon at the top of the pitch

At the top is bonkers. The vertical rift takes a proper right angle to horizontal, now giving us a bedding heading off to the north as well as a small level heading off in both directions! I headed into the level heading west and pulled up the bag full of gear. After using a bit of imagination I placed two bolts and rigged for Jon to come join me. Across the pitch looking east looked good but we decided first to go west, as that’s most important, plus it was draughting! Along the side of the bedding a small clay launder has been made by T’Owd man, presumably to collect the drips coming off the bedding to be used somewhere, somehow. After 10m or so the bedding has stopped being worked and you get a brilliant view of the mineralised rift bending over, with all the layers and lines inside intact. This unusual feature can also be seen in the eastern end of the mine and there it was accompanied by some natural passage and chambers… just saying. 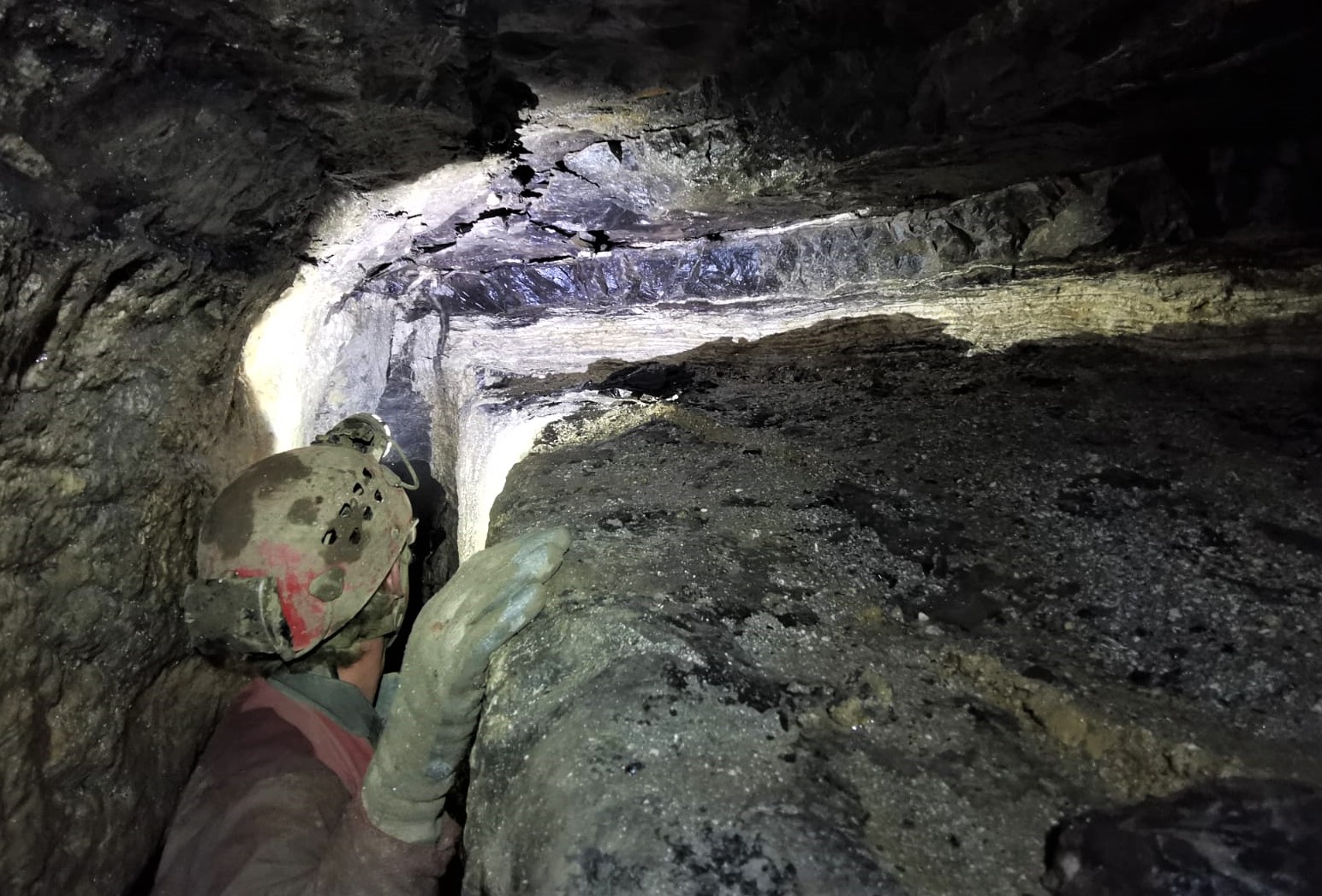 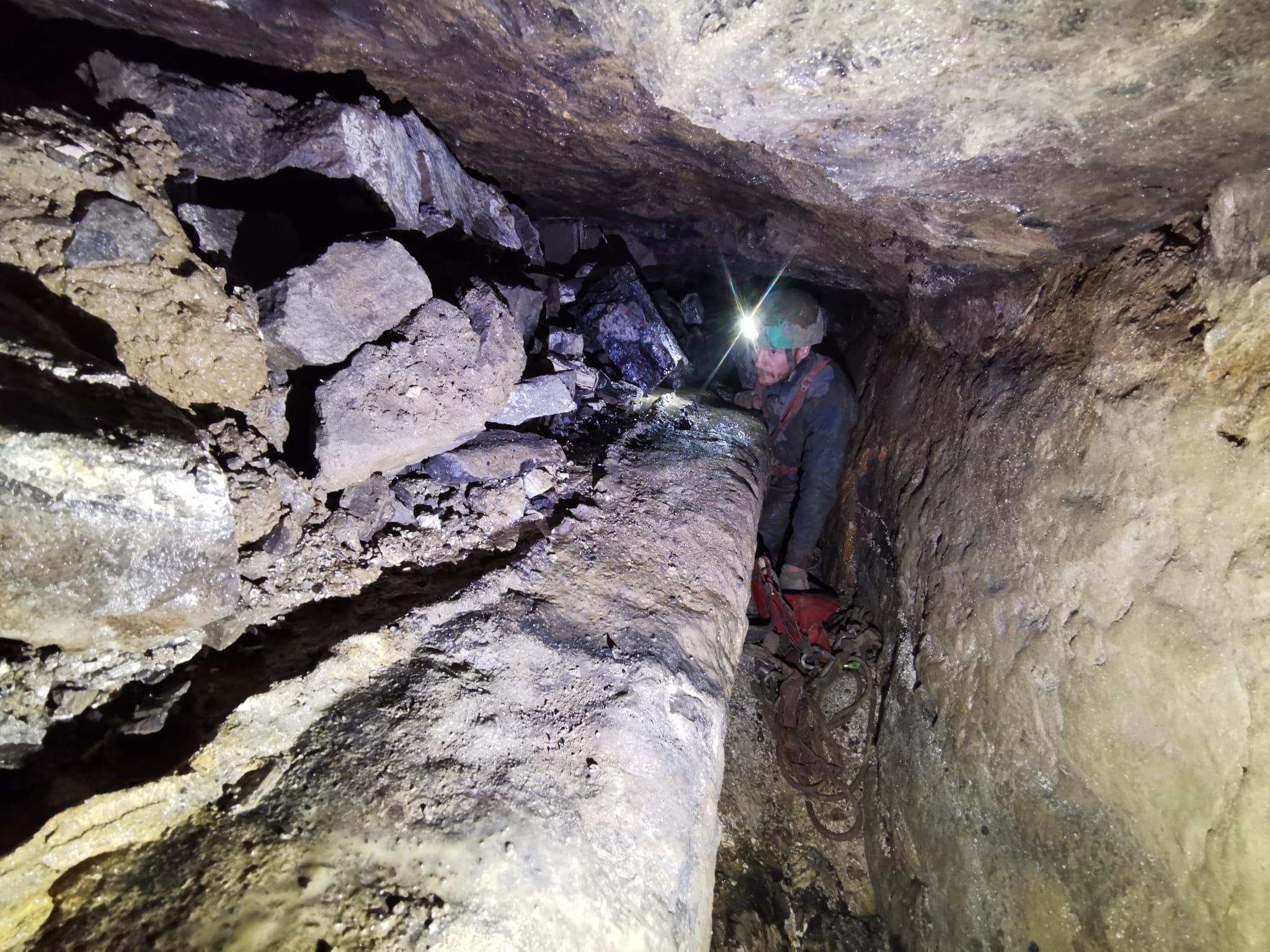 The level ahead dropped into some small worked out rift chambers, notable by the dry “cat litter” like gravel on the floor, maybe from some washing process occurring here previously? A couple squeezes on and we stopped at a big view out over the rift below and ahead. Here it was too wide to safely continue without a rope, but it gives us a nice lead to return to. DistoX shot gave a 30m drop down!

We survey back to the pitch then Jon goes for a little look along the bedding there. After only a couple metres the roof ascended again, unfortunately into a stacked blockage, but noticeably with a draught coming down. It looks like the horizontal section of the vein may only be a short offset. He had a poke for 10 minutes, whilst I surveyed to him, and the way on looks good still, although it’ll need a long pokey stick.

Getting near to leaving time I have a quick look East, across the top of the pitch. And easy climb across gets into a wider section, where they have unusually piles a couple rock pillars up to the roof; maybe they know something we don’t?! Beyond here the horizontal bedding is totally lost as the two vertical sections join; this place feels like a geology textbook right in front of you, if only they could get the school kids here! Beyond the rift is quite small and goes up a ramp before entering a much taller section with open ways up in both directions. The draught here was going up, so it’s less exciting that the other direction, but maybe it may offer a bypass to Jon’s dig and head back west again, or something else?!

I survey back to Jon then he starts heading out whilst I sort gear at the top and survey down to the TAP Traverse. Once down we have an uneventful trip back to the engine shaft. After spending many hours in small worked out rifts this place is big and goes to show how big an enterprise this place once was. By the time I’d prussiked out I was pretty knackered and going slow, but thankfully Jon was there to point it out to me. Post beers at the car as we’d just missed last orders, again.

A great little trip and paves the way for a few more adventures still to come down Intake Dale Mine.