At the dig I went first, capping a few big rocks, and then let Big Guns Pembo shift it all out. Working at the bottom as pretty awkward, your legs are totally in the way so you end up doing a weird passing of the rocks up between your legs and then a push up in the air for the person above to reach and remove. I once tried reaching down head first and indeed managed to collect a rock but then failed totally to get my body or the rock out of the hole; a very ungraceful time for me. 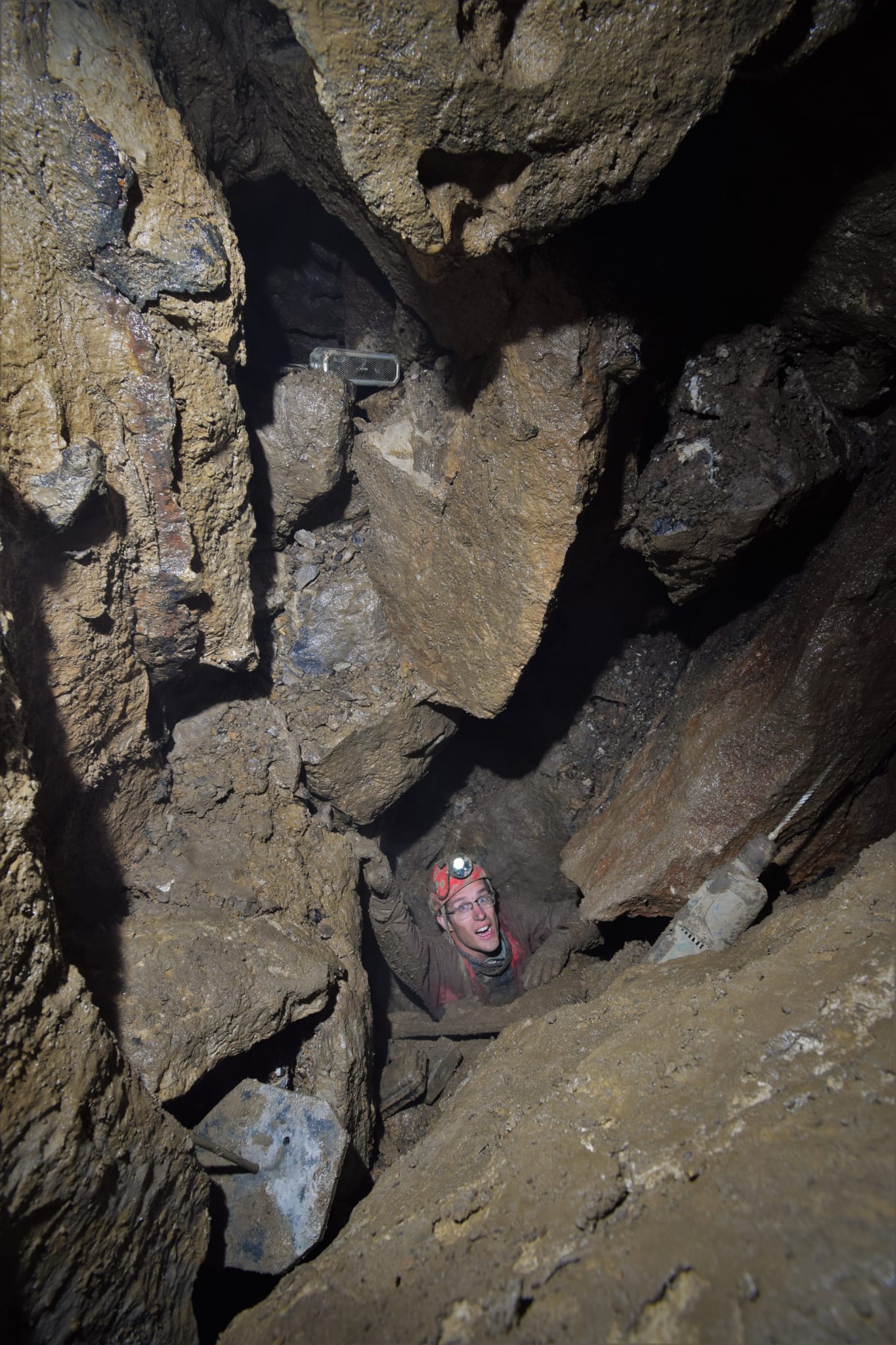 The top of our dig for the day, by JonP

We could see down a small rift but there was two annoying rocks just jamming the space and stopping us dropping spoil down, which would be much easier. We swapped again and I removed the big rock by capping it and then the littler one by kicking it down. After a bit of tidying and kicking stuff down I ended up waist deep in this tight rift, facing the left hand wall. Behind my legs there was space that I could kick back into and it felt like it might be big enough to get into. I came back up, turned around, then went back in, having to breathe out slightly to get myself down the rift. Once in the undercut a slope down continued away and I gingerly kicked stuff down and slid through into a bigger space beyond, nearly big enough to stand up in. Here I’d reached the opposing wall of the rift and the roof was made up entirely of large, water-worn boulders. To the left (after checking my handy wrist watch compass setting I can confirm this was South East) I pulled a thin mud wall down to reveal another slope down heading off, this time with solid(ish) rock making up the roof and walls. I shouted up to Jon and he was keen for me to continue without him.

I headed in head first, trundling a few small rocks away to make space. A larger one blocked the way so I pushed it a little way forwards then was able to head over the top of it. Unfortunately I did this poorly, managing to make it roll forwards as I did, eventually trapping my legs between it and the roof above. I tried but was unable to push it back up the slope or to the sides, nor could I reach my kneepads to try push them around the boulder. What an idiot. Eventually I ended up digging a bit of a trench under my groin (with my hands, obviously) then successfully risked pushing forwards down the slope and dropping the boulder into this hole sufficiently to free my legs! Phew.

After about 7m I got to a small chamber, again only just tall enough to crawl in. There was a muddy collapse to the left and a clean one in front. Both looked like miners collapse and would need tools to make any progress. I had a careful look around and found a few pick marks in the roof along a lead vein, proving my thought that we had indeed made it through the choke and back into old mine. Just such a shame that there was no open way on, nor any draught. This area is about the right height to line up with the levels at the top of the climbing shaft in Sooty, although that is still +30m away horizontally and was a pretty conclusive end, so the prospects are unfortunately not great.

I went back to Jon and we made our way out, checking out all the other holes in the choke on the way. We’ve obviously missed the draughting way on somewhere, although it has to be said none of it draughts as strong as Nomenca, and certainly not Sooty, so there’s definitely more going on.

We made it out in time for the pub, a rare occurrence for TA these days. However it was shut so we enjoyed a quick can before heading home.