Hunting for mines and almost killing the Chairman - 25/04/19

With French Jeff away it was just Rob and I tonight. I had spent the past few days looking at Google Earth trying to find some mine shafts that we hadn't looked at yet, turns out there's bloody loads! We had narrowed it down to 3 target areas that we would look at for this evenings little trip. We met up and slowly got changed and headed out into the field which would be our hunting ground for the night.  We walked along one of the rakes which I had possibly seen some evidence of a covered shaft but only found rock piles. Rob had moved a little off the rake and quickly found an interesting little hole. Its in a small depression with what looks like a well established footpath leading into it. At the far end a small hole appears with two solid walls. Sliding down into the hole you enter a small chamber with solid walls but a man-made roof. A very strange little place which needs a bit of further investigation to see what it's all about.

We headed back out and moved over to the next rake, just up from Portaways, which we explored last week. We very quickly found 3 covered shafts one after another. One of these looks like it could be worth getting into but with only the two of us we had no chance of lifting the heavy concrete sleepers, this will have to wait till we have the full team together. We were getting a bit disappointed at this point with not finding anything we could actually get down so we had a quick look at Google earth and found a very interesting looking place just above Conies Dale. As we came over a hill we were greeted with an a huge open mine shaft with a metal grated lid covering it. This thing is a big one shaft! Roughly 3 metres in diameter and we could easily see down 20M. In the middle of the grate it has a square lid which is bolted. We hadn't brought any spanners with us so there was no chance we would be going down tonight but we were both very excited to return next week and get down it. After a bit of research it turns out this mine is called Jowle Grove mine. 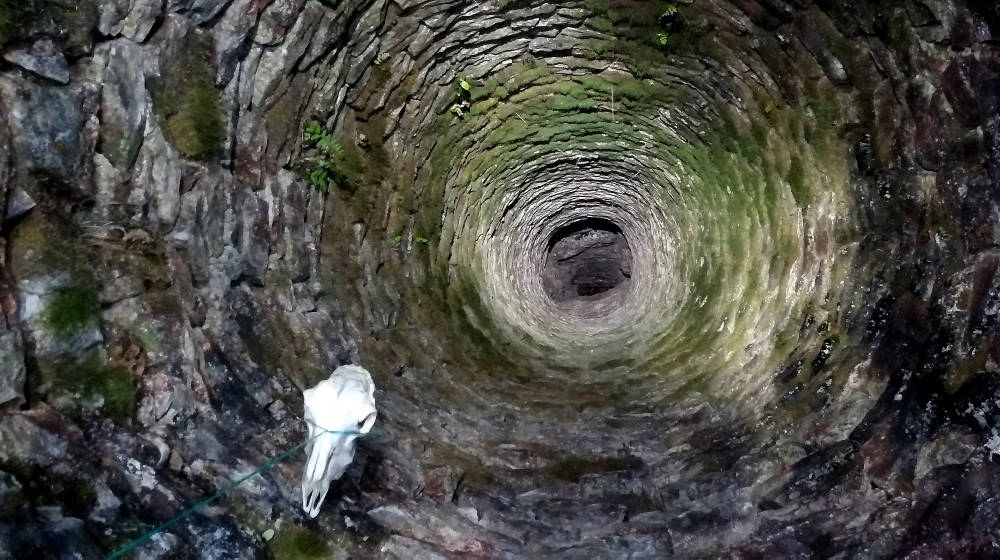 As we headed back to the car we had a quick look down Thistle pot. The farmer has done a pretty good job of covering the entrance but we managed to squeeze ourselves down the side of the rock filled cage. After the little squeeze you find yourself in a rift, a metal ladder was still in place from the original dig. At the bottom of the ladder a little free climb takes you further down the rift. As I followed Rob down I touched the wrong rock and it went flying down hitting Rob below me, he took it like the hero he is, and I very carefully climbed down to where Rob was. Rob then headed down and I wormed my way into a side passage which just heads up towards the surface so I came back. At the bottom a lot of blasting from the original explores has made it very fractured and a little unsafe. With no way on at the bottom Rob headed back up to me. He decided that it was his turn to chuck some rocks on me so headed out above me but got a little distracted with a continuation of the rift behind us, so he traversed over the top of me and had a look, bad move Rob! I overtook him and set of up the ladder. As I come off the ladder it moved and caused the stacked rocks behind the ladder to go tumbling down and smash into Rob below me. I did shout down to him to watch out and Rob with all his wisdom decided to leave his relative safe spot behind him and dive into the main rift bridging himself with a big hole below him and take the full brunt of some big rocks flying down on top of him. Both of us a little shaken we very carefully climbed out to safety. No major damage to our illustrious Chairman and he took it quite well. Sorry Rob! To the pub for a well deserved pint and I only thought it was right to buy the beer!