After our surface celebration last week we were geared up for a good push into the unknown, although not before Jon tackled the beast head on with having another crack at the photo looking down Inglorious. I was really keen to help but he only needed 2 helpers so I let the others enjoy assisting him whilst I headed on to the dig, picking up more tools on the way. Moving through the cave today felt great up until Loper Lust which is always sapping of energy, especially with a bag. It does seem however that the filthy clay may be becoming less grippy as it dries, which is a promising sign for the future. 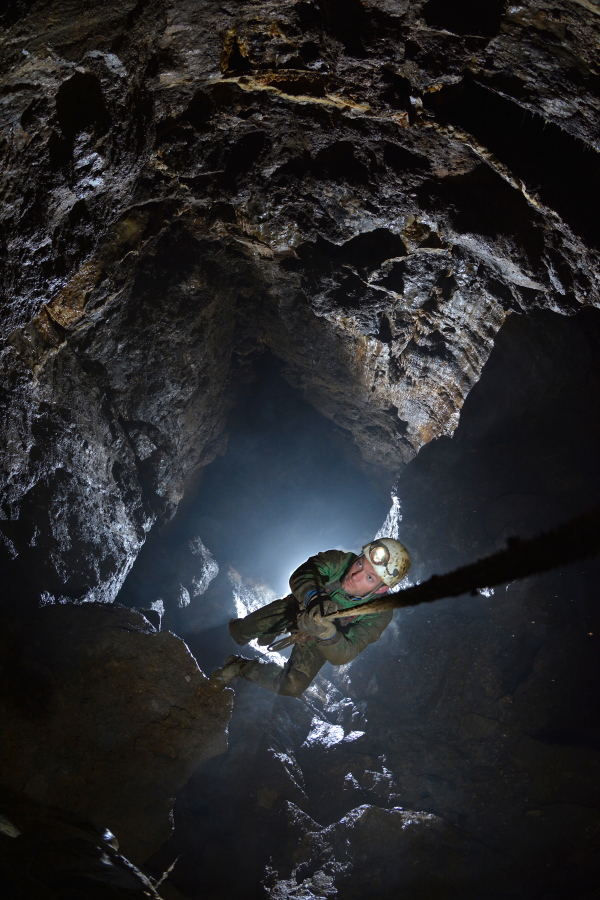 Looking down Inglorious Bastards, by JonP

The plan this week was to attack on two fronts. The dig at the end of Deep South looks great and takes a huge draught but the best way to attack this would be if Black Draught could be connected as it’s quite close and would avoid Loper Lust, so I prioritised the dig me n Jeff started two weeks ago.

Capping the boulders was hard work due to it being so restricted, plus they were a mix of really hard limestone and really soft barytes. On the third hole the caps didn’t fire, which is annoying but quite common. Normal procedure here is to twist the rod 90° using a spanner and then hit it again. However this time the twisting motion set off the cap, simultaneously filling my face with shatter and my pants with dinner! And now I couldn’t hear the digging tunes anymore. Nevertheless good progress was made and the others soon joined me after their successful photo mission.

Jeff took over removing the rocks now from the roof whilst I showed Jon and Dave the Deep South dig, only a few metres away. Here only one boulder blocked access to a low bedding passage and we took it in turned to try to manoeuvre it before giving up and capping it. Nevertheless it was still very hard to shift, owing to its awkward shape and the tight working space. Jon took to hammering it and eventually it gave it and pushed aside. Unfortunately the passage heading off was still a bit too small to move along, especially as it’s heading slightly downhill and everyone was getting a bit knackered.

Jeff had reached a block that needed the capping gear so I brought the gear back to him and offered to hit it, before seeing that it was perched right above the entry position leading to a hilarious attempt at hitting the capping rod from as far away as possible with ever tiring arms. Thankfully the rod didn’t get stuck this time and after two holes it was in small enough pieces for Jeff to drop them down relatively safely with only a few impacts to his head. The others were getting cold and tired so they started heading out, whislt me and Jeff kept poking. 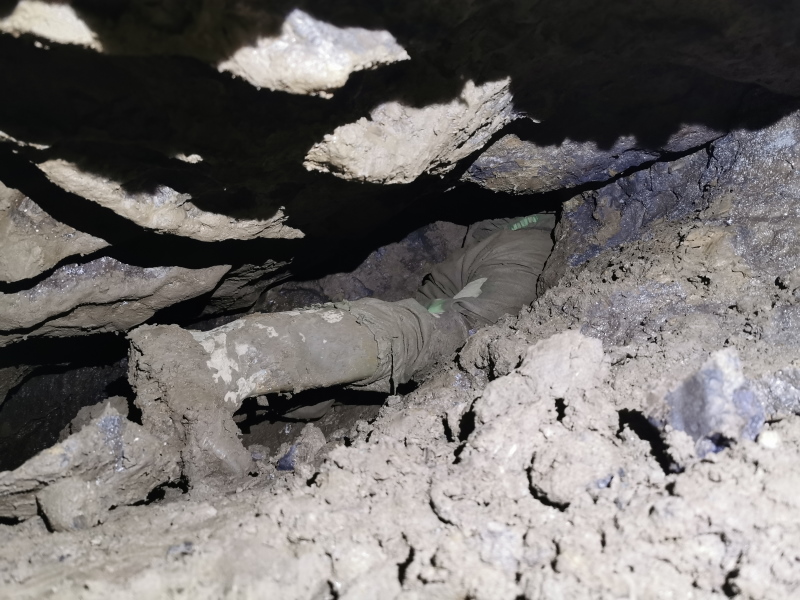 Jeff in the cramped working conditions of this obscure dig, by Rob

The remaining hole now gave a tantalising sight of a flat roof leading off but unfortunately it was a bit too tight for Jeff to comfortably get up through. I had a go and managed to just about force/squirm/wriggle a way up into a flatout room above which lead down a short slope into a great looking bedding plane passage, littered with stal. Awesome! Once I’d got my legs up out of the hole I slid down the slope, making careful note of the route in case I had to back up feet first. Once in I could see a long way ahead. It was low and floored with mud and puddles which weren’t very pleasant, but it was all metres gained heading presumably towards Black Draught, which it should be pointed out is exactly the same size, shape and character. After 10m this passage (now named Draught Black for optimum confusion) got wider with a new passage seemingly coming in from the right. This felt like it must be close to the Deep South dig. It was unfortunately too tight to easily get over to it so Jeff went around to Deep South and we got a good voice connection through. This unfortunately suggests that Deep South is in fact not leading off into something else, although it all needs a better look over there.

Straight on in Draught Black the going quickly got lower as the passage got wider. Even with helmet off I was unable to make much more progress. The mud floor will need digging out a bit, which will not be an easy job. Looking ahead there was no obvious point that looked like the end of Black Draught which is all a bit unfortunate whilst still very much in keeping with the rest of Cussey. Nothing seems to be easy here.

I started heading back and thankfully I was able to turn around quite easily. Back at the dig I realised now that I had to reverse the manoeuvre but this time head down. Once in up to my hips it hit home how very committing this position and sure enough I wedged firmly into place. Upside down, mucky water dribbling into my increasingly bloodshot eyes, legs trapped against the roof above, at least there was Luke’s crap country music to lighten the mood. After a while Jeff offered to try push me back up but thankfully my pride came through and I was able to twist, bend and slide just right to get my hips through and plop down into the passage below into a knackered, dizzy, deaf pile. Silly game, but success nonetheless.

We packed up the gear and headed straight out. I was grateful of Jeff going ahead with the bag. Loper Lust was especially fun for me this time as my light stopped working at the start. Turns out it is possible to do the full crawl in pitch blackness. Back in Inglorious Bastards Jeff helped me fix the light and we headed out. Weirdly only took us 20 minutes to get out from here, I think probably because we were both so keen to get that well deserved beer in us. On the surface by 23:30, that was definitely the hardest trip I’ve done in there. A quick debrief with the others who were already fully changed and ready to go. Not sure where this discovery takes us. Black Draught now looks less inviting that Loper Lust, and whilst it may offer an all-weather option, it may not be worth the effort. Time to have a think…