With Luke bailing on us we had to pick an 'arf decent trip for my second leaving do. We had two goals; to survey to the top of "Corkscrew Aven" and to make it to the pub! A perfect evening for it and with Awesome company (no dig at Luke...) We kitted up in the sun whilst supping a farewell Hobgoblin, descending the cave at 7:45pm and rapidly rigged Garlands with no hardware, luckily we had a rope.

Once at the Plughole we relieved ouselves, the pre-beer working its way through as expected (the only downside to this awesome detail) Rob traversed out over the pitch and gingerly wedged himself enough to not fall down the pitch and gain access to a ledge midway up the pitch. He shouted he was safe and I made my way up from the floor of the pitch. An awkward little climb gave way to a ledge so I could just about reach the knot at the bottom of the rope. We ascended the first pitch and could immediately tell that a shed tonne of rock had fallen down from above! 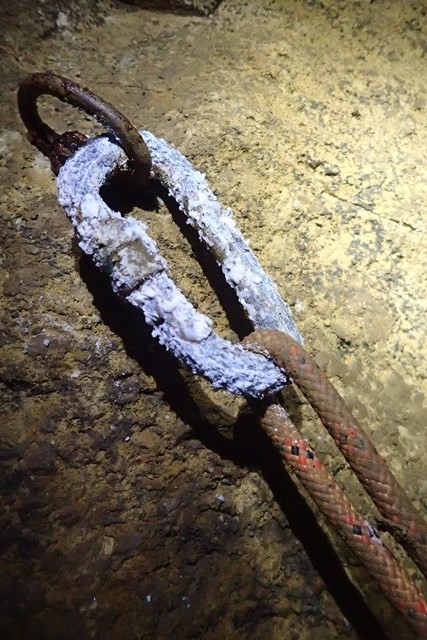 The first pitch was climbable, up a gently ascending calcite waterfall protected by the 20 year old rope. Luckily neither of us fell as it had a severe rub point completely through the sheaf which has now been isolated making the bottom of rope now a foot higher than it was before. The bolts were ok and was backed up to a thread which looked pretty bomber. The passage now entered an awesome 60 degree sloping phreatic tube. This led to a succession of pitches followed by more awesome sloping phreatic tubes gradually corkscrewing away up to its termintation some 60m above, a voidy clean washed choke mainly shored up with a bit of timber and what looked like drain pipe... 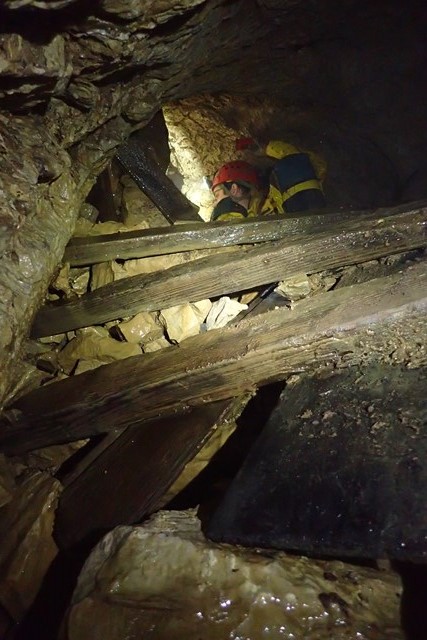 Rob at the choke

We surveyed our way out, having a gander at the make-shift camp they had up there which had mostly rotten away. Unfortunately I couldn't quite get a date off the moist newspaper but there was an empty can of coke with "Euro 96" on the top. Also a small stove, tape measure, wine bag, the usual crap. SUSS - I've got a job for ya... 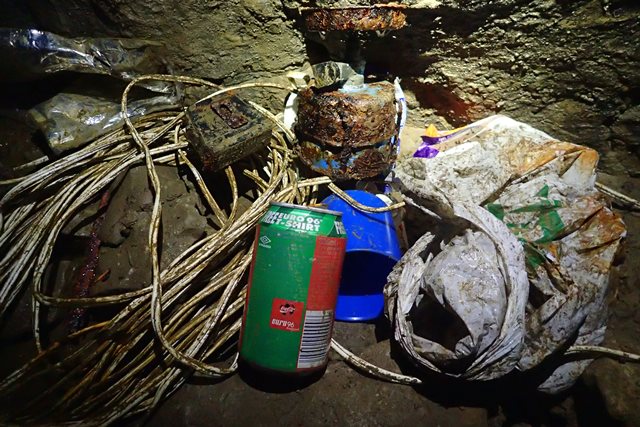 The water emerging down the passage which is predicted to be the water from St. Valentines emits from the choke. and pisses down the rope of the final pitch. This would be pretty grim in high water i'd imagine. 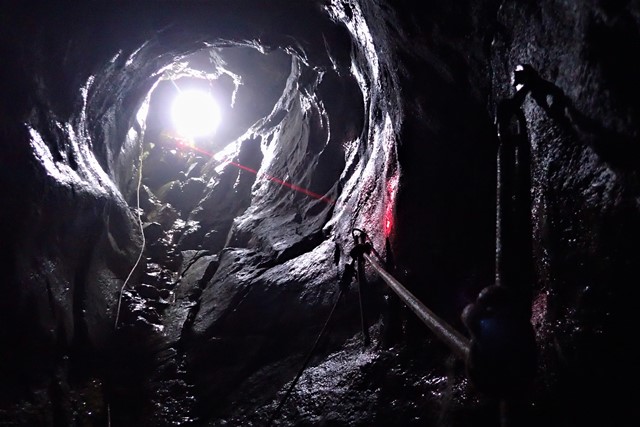 We hastily made our retreat, pretty much legging it out of the cave and made our way down to the  'Cheese for an Awesome pint of Brown Cow. An exciting piece of Giants which is a must do in my opinion but who listens to me anyhow?